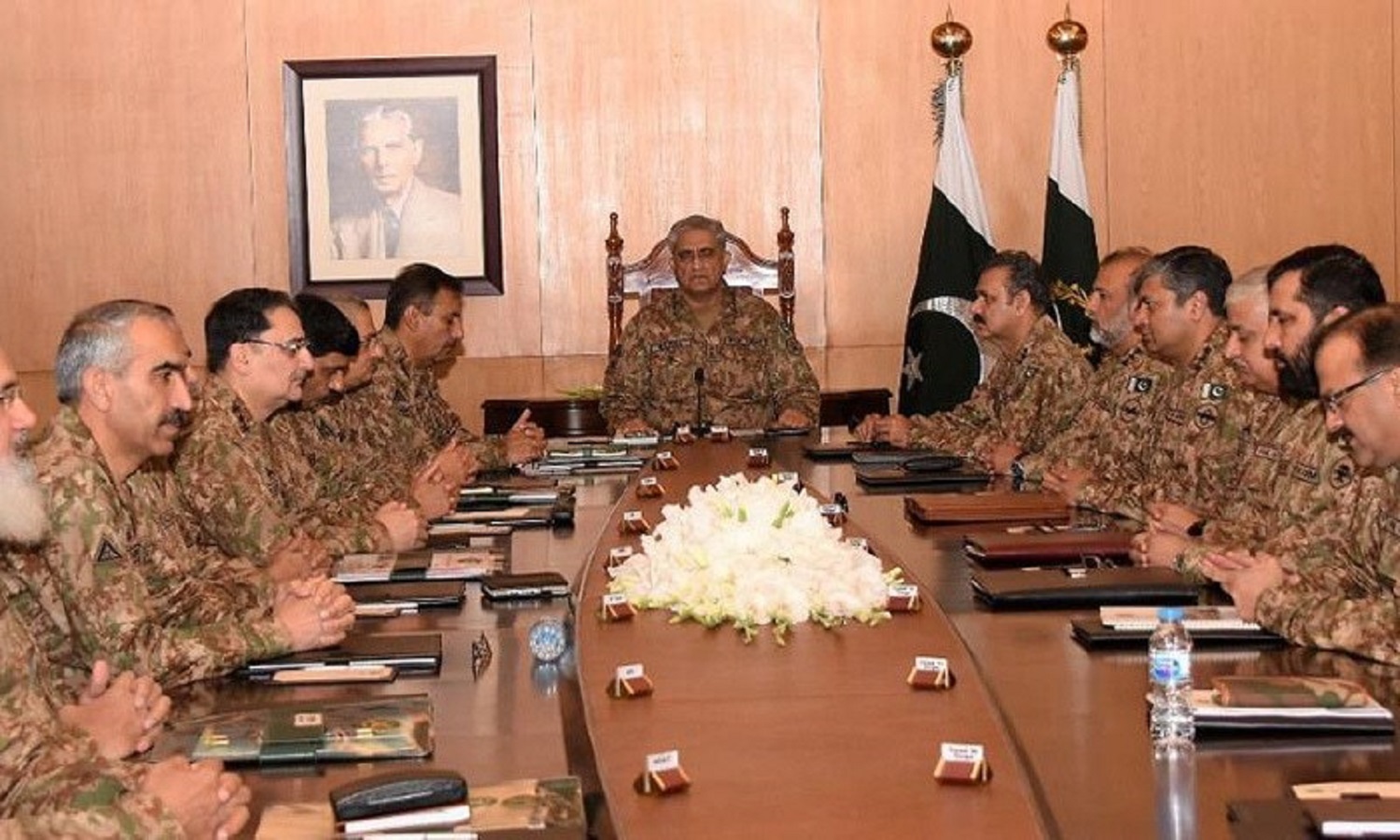 Chief of Army Staff Gen Qamar Javed Bajwa on Thursday chaired the 219th Corps Commanders’ Conference in Rawalpindi at the General Headquarters, and reviewed the region’s geostrategic environment as well as the situation arising due to strained Pakistan-India relations.

According to a press release issued by Inter-Services Public Relations (ISPR), the military’s media wing, the meeting “expressed strong will, resolve and determination to defend the motherland against any misadventure or aggression”.

The forum, as per the ISPR statement, “expressed concerns on increased Indian atrocities in Indian occupied Kashmir post-Pulwama incident and continued deliberate targeting of civilians along the Line of Control by Indian occupation forces”.

“Continuity of such brutalities are only fuelling the fire and need to be stopped in the interest of regional peace which also merits world’s attention,” concluded the forum, which also “discussed the progress of National Action Plan 2014 (NAP)”.

Army chief Bajwa “appreciated the morale and performance of the forces, support from the nation and above all the blessings of Almighty Allah”.

Furthermore, he directed the forces to remain in a “continued state of vigilance and alertness so as to be prepared for response to any threat”.

The COAS issued directives “to further the efforts in line with the decisions of the government to accelerate the implementation of NAP while rendering full assistance to other state institutions”.

“Pakistan is on the positive trajectory of peace, stability and progress. No one can make us budge through use or threat of use of force. Similarly, policy and the right of use of force shall remain the prerogative of the state alone”, the Army chief concluded.

COAS Bajwa’s comments on NAP’s implementation come a day after the federal government intensified the ongoing crackdown on Jaish-e-Mohammad (JeM), Jamaatud Dawah (JuD), Falah-i-Insaniat Foundation (FIF) and other banned outfits, arresting of more than 100 activists and taking over nearly 200 seminaries besides hundreds of other facilities and assets associated with them across the country.

The operation against the proscribed orga­nisations would continue till “achievement of objectives” under the National Action Plan (NAP) of 2014, Minister of State for Interior Shehryar Afridi had declared in a tweet, adding that efforts were being made to accelerate progress on NAP.